Playing in tournaments is the aim of many people who learn tennis, not all, but as a coach, I believe they are an excellent way to practice, learn more and meet other tennis crazy people.  The ATL tournaments are no exception.

The ATL (Amateur Tennis League) 500 Limassol finals took place this Saturday 5th November 2011 at Aphrodite Hills.  The winner of the singles was Dimitris Giorgiou from Nicosia in straight sets with a scoreline of 6-4 6-0.  In the doubles, Yiannos Trillides and Menelaos Theodoulou were victorious edging paste in the ties breaker to take it at 6-3 3-6 7-6 (8-5). 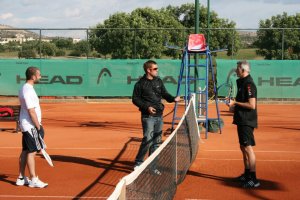 Umpire and head coach at Aphrodite Hills, Wyn Lewis, said, “I’d like to congratulate all the players today.  They played at a very good level in tough conditions, with the wind pretty strong throughout.  This is a great example of how exciting tennis can be and I’m looking forward to seeing it grow further here in Cyprus.”

In his first ATL tournament, Loukas Stylianou pushed Dimitirs hard in the first set of the singles, but an injury at the end of the set put paid to his chances.  He carried on fighting through to the end, but it was Dimitris’ day.  His aggressive, attacking style won through.

In the doubles, Loukas Toumazis and Colin Relton fought back from a set down and took it to a tie breaker in the third set, where the advantage swung back and forth.  Eventually Yiannos and Menelaos toughed it out and won.

All four players in the ATL 500 Doubles Final

According to Nikos Tsangarides, founder of ATL, “First I’d like to thank everyone who competed today.  There was a great atmosphere and true sportsmanship; exactly what ATL represents. We created the ATL tennis tournaments provide everyone with the chance to compete, improve their tennis and have fun.  At the same time, we wanted to create a tennis community, where people can meet, watch and talk about tennis and arrange to play each other.  Surprisingly enough, I often hear people saying they have no one to play with and ATL is one way to overcome this.”

Started in 2011, the ATL (www.atlcyprus.com) has been growing rapidly in popularity.  It provides amateur tennis players throughout Cyprus with the opportunity to pitch their skill against other players competitively, earning points towards their ranking as they progress.  There are a variety of tournaments taking place each aimed at different tennis playing abilities, enabling someone playing their first ever match through to semi-professionals to take part.   Players can register now for the next tournaments on the website at http://www.atlcyprus.com.